Home › What We Do › Advocacy

A significant portion of our work is advocating for policies that advance the green stormwater infrastructure industry, including driving market demand for nature-based stormwater management and creating a navigable regulatory environment for local businesses in the GSI industry.

We are proactive and responsive to relevant agencies and stakeholders on topics that impact the growth of the GSI industry and its role in shifting the economic ecosystem towards equity and climate resilience.

We are a trusted voice in the growth of the GSI industry and our many research contributions have been used locally and nationally to demonstrate the necessity to prioritize green infrastructure solutions. 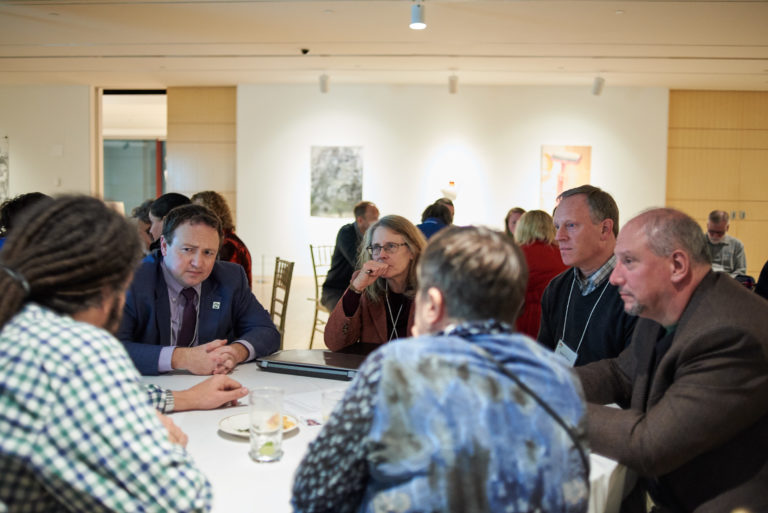 Our advocacy work has included

The Impact of Green City, Clean Waters on Philadelphia (May 2019)

In 2019, SBN published an update to our 2016 impact report on Green City, Clean Waters. With this new report, we sought to identify a few of the ways GSI is contributing to larger City goals around economic and racial equity and climate resiliency. We presented the results of our study to City decision makers and we continue to advocate for the City to strongly support GCCW and GSI. Read the report and view the infographic.

This highly anticipated report was commissioned by SBN’s GSI Partners in 2015 to measure the local economic impact of the first five years of Green City, Clean Waters (GCCW). SBN staff held a briefing with City Council to share the key findings and advocate for their ongoing support of GCCW. Read the Report

SBN was represented on the Mayor’s Transition Team as part of the Sustainability and Environment. The Kenney administration released their report detailing the recommendations they accepted as priorities, which included our recommendation for the strong continuation of Green City, Clean Waters and its triple bottom line goals. Read the Report

Breakfast with the Deputy Commissioner (December 2015)

SBN brought together GSI Partner members and Dr. Chris Crockett, the Deputy Commissioner of Philadelphia Water, for a conversation around the first 5 years of Green City Clean Waters, what is next, and how the local business community can support the next phase of the plan’s implementation.

In advance of the Stormwater Regulatory Update, we, along with our friends at NRDC and PennFuture, sent a letter to PWD offering our support on certain aspects of the proposed changes, and offered comments and concerns about others. Read the summary of PWD’s response to us from September 2015 – via in person conversations and written replies. We note what we heard the Department can currently do, what we heard is the intent of certain aspects of the Guidance Manual, and what we heard might be premature to do at this time. As always, we appreciate PWD’s communication with us, and look forward to continuing the dialogue with them to support progress in these and other areas. Read the Letter

Staff, along with several members, testified to City Council in support of the expansion of the Green Roof tax credit, and offered recommendations for continued improvements to the credit and the process. SBN Testimony to City Council on Green Roofs Tax Credit

In anticipation of the July 2015 Regulatory Updates, and to support GSI Partners goals of seeing better facilitation of the approval of greener and more innovative stormwater management practices, our Administrative Advocacy Committee evaluated what is working well with PWD’s current Stormwater Plan Review process, unpacked where there might be opportunities for improvement, and provided recommendations. Recommendations fell into five categories: Communication, Resources and Website, Process, Code and Policy, and Internal and External Coordination. Summary of Stormwater Plan Review Interview Recommendations & Read the Full Report

SBN’s GSI Partners convened a Local Community of Practice, an immersive leadership development initiative for a subset of members. The group was tasked with crafting recommendations on how to maximize the success of Green City Clean Waters, especially as it relates to small and local business. Recommendations fell into the following categories: Policy; Process; Innovation and Research & Development; Financing; Contracting and Procurement; and Resources. Read the Full Report

Want to learn about all of SBN’s Policy and Advocacy work?