The Excellence in GSI Awards Ceremony is the region’s only award that celebrates and elevates green stormwater infrastructure projects, the triple bottom line (TBL) benefits of GSI, and the many public and private partners who make these projects successful.

On May 11, 2017, SBN’s Green Stormwater Infrastructure (GSI) Partners honored exemplary public and private projects, and the teams of people behind them, that are bringing the environmental, social, and economic benefits of green stormwater infrastructure to life in Philadelphia and the region. 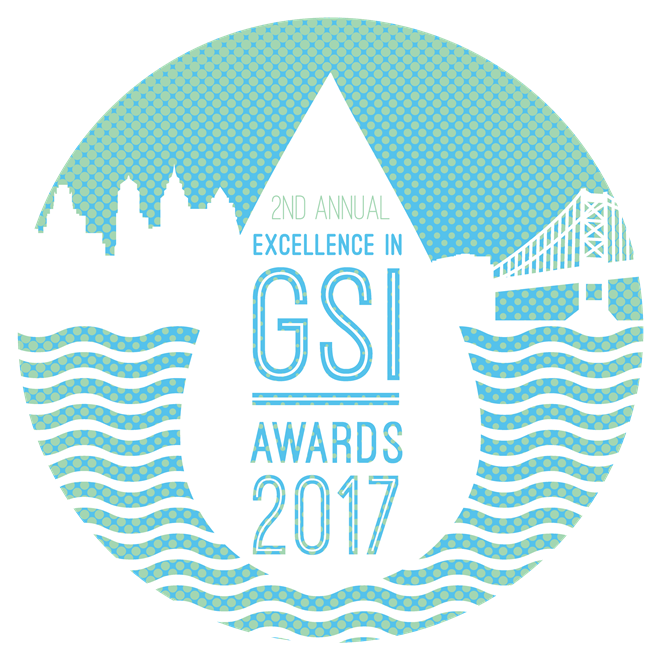 The Jenkintown Creek Restoration Project is a collaborative effort to improve water quality and monitor measurable improvements in a small watershed. The restoration activities to date include design and installation of several non-structural BMPs, including 3 rain gardens, a 100’ linear bio-retention feature, wetland enhancements, and installation of stream buffers along 1,500 feet of the Jenkintown Creek. The BMPs, which feature 935 native trees and shrubs, and nearly 3000 native herbaceous plants, manage the first inch of runoff from roadways and parking lots that previously directly discharged to the Creek and create important habitat for wildlife.

More than 1000 volunteers have supported TTF Watershed’s efforts on this project, including middle schoolers, high schoolers, and college students from 9 different schools. Participating in such efforts provides students and community members with an appreciation of healthy watersheds and as a result, is improving stewardship of land and water resources.

Signage supports passive learning about a nature-based approach to stormwater management, the importance of clean water, and opportunities for community involvement.

The TTF Watershed Partnership’s monitoring and maintenance program, the TTF Streamkeepers, perform regular inspections of all stream buffer and green stormwater infrastructure projects, including this Jenkintown Creek headwaters project. The Streamkeepers program has 30 active participants who, with support from the Academy of Natural Sciences and Stroud Water Research Center, perform visual and basic chemical assessments. Temple University’s Center for Sustainable Communities and the Villanova Urban Stormwater Partnership are monitoring performance of the projects.

At least a dozen local design and construction firms and local native nurseries were engaged throughout the Jenkintown Creek Restoration project, including several members of SBN’s GSI Partners.

TTF works to improve the health of our watershed by engaging our communities in education, stewardship, restoration, and advocacy. The Jenkintown Creek Restoration project is an example of TTF’s mission in practice.

The goal of the Nature Learning Lab at Frankford Friends Elementary School was to create an outdoor learning space for the elementary school students, while simultaneously implementing green stormwater infrastructure.

Like many urban schools, the open space available for play and exploration at Frankford Friends was predominately concrete and asphalt before the design and construction of the Nature Learning Lab. Using entirely non-structural BMPs, a landscape was created that completely manages its own runoff through absorptive soils and native vegetation, and provides educational play space for children.  Students now enjoy natural objects, water features, native plants, outdoor gathering spaces, and active play spaces. The Learning Lab’s rain gardens, pollinator garden, and other natural habitats have become a central part of the science curriculum unit where students learn about watersheds, stormwater runoff, water ecosystems, and native plants.

ThinkGreen served as both the landscape architect and the contractor, which facilitated an efficient, adaptive, and cost-effective approach for the project.

Because the site achieved such a high level of perviousness and disconnected surfaces, it was eligible for an expedited review process through PWD, which also saved time and budget. The Philadelphia Water Department provided partial funding via a SMIP grant. Local and reclaimed materials further minimized cost and environmental impact of the project.

The school is currently in the process of master planning future green stormwater management techniques for the remainder of the campus.

VUSP’s mission is to advance the evolving field of sustainable stormwater management and to foster the development of public and private partnerships through research.

One of these practices is a bio-infiltration traffic island. In August of 2001, VUSP retrofitted an existing traffic island in Villanova University’s West Campus Apartment Complex to manage stormwater runoff from an impervious access road, parking area, and a basketball court.

This small but mighty BMP continues to be used as an example across the country and as the subject of research for many students including high schoolers, and undergraduate and graduate engineering students. Many publications covering several different topics have been issued and presented at national and international conferences over the years.

Educational signage has been installed at each site to enhance passive learning experiences. The experiences gained through the construction, operation, monitoring, and evaluation of each site form the basis for the outreach and education component of the Research and Demonstration Park.

In addition, a number of technical guidelines have been written with the intent of standardizing the design of structural BMPs such as this bio-retention traffic island, based on learnings from the design, construction, and maintenance of this project.  Two manuals of note are the Maryland Stormwater Design Manual and the Pennsylvania Stormwater Best Management Practices Manual.

After analyzing data from all events at all systems during the monitoring period, it was observed that only 18 (3.6%) of the 497 exceedances predicted (based on current engineering design assumptions) actually occurred, showing that the designs are conservative.

PWD continues to pursue data collection on GSI performance and is developing new monitoring methods to scale up with implementation of GSI. To explore research topics focused on GSI, PWD is working with partners in the academic community at Drexel University and Villanova University. Additionally, PWD is working with the recipients of SBN’s GSI Partners monitoring grants to explore new GSI monitoring sensing technology developed by the Stroud Water Research Center.

Mr. Andy Kricun, the Executive Director and Chief Engineer for the Camden County Municipal Utility Authority (CCMUA) since 2011, has long championed green infrastructure in New Jersey as a multi-benefit stormwater management approach, starting with the City of Camden.

Key to Mr. Kricun’s success has been his commitment to engage and enlist partners. In 2010, CCMUA and five partners — the New Jersey Department of Environmental Protection, Rutgers University, the New Jersey Tree Foundation, the City of Camden, and the Cooper’s Ferry Partnership (a local community development non-profit) — banded together to form Camden SMART (Stormwater Management And Resource Training), with the mission of developing, as the CCMUA website describes it, “a comprehensive network of green infrastructure programs and projects for the City of Camden. The initiative includes neighborhood…projects, stormwater management policy development, and green infrastructure training programs.”

By 2014, just 4 years later, efforts by Camden SMART have resulted in 49 green stormwater infrastructure projects completed; 1,458 new trees planted; 223 rain barrels distributed; 5 new riverfront parks constructed and a stream daylighted; 4,000 residents engaged; more than 40 partnerships created; and $5 million invested in the city. These efforts have not only diverted more than 61 million gallons of stormwater from the city’s sewer system, but also have improved the appearance and health of many Camden neighborhoods.

Among the Camden SMART projects spearheaded by Mr. Kricun, is the construction of Phoenix Park, which transformed a 5-acre brownfield site into a new waterfront park that currently manages over 5 million gallons of stormwater annually. Phoenix Park, which serves as an oasis for residents while also alleviating some of the neighborhood’s severe flooding issues, is a bright example of the potential for revitalization of Camden and other distressed urban areas.

Phoenix Park has been recognized by the US Environmental Protection Agency and the Environmental Council of the United States as one of the ten most innovative uses of Federal water infrastructure funding in the country, and is included in the GSI Precedent Library that SBN’s GSI Partners co-published with DVGBC in the fall of 2016.

Mr. Kricun is also a founding member of the Camden Collaborative Initiative, a partnership among governmental, non-profit, private, and community-based agencies formed to develop and implement innovative strategies to improve the environment and the quality of life of Camden’s residents.

Additionally, Mr. Kricun’s efforts have been instrumental in transforming statewide understanding of green stormwater infrastructure and its importance through his prominent role in Jersey Water Works, an innovative state-wide collaborative that was formed to address the crisis in New Jersey’s water infrastructure.  Mr. Kricun is a member of the steering committee, co-chairs the combined-sewer permittee network within the collaborative, and has been an active member of its Green Infrastructure Committee.

Thanks in no small part to Mr. Kricun’s leadership, Jersey Water Works has grown to almost 300 members, half of whom serve on one or more of its committees. The collaborative reaches more than 2,300 interested stakeholders, and has achieved ambitious goals for 2016 and set more for 2017.

Mr. Kricun’s inspires all who work with him! Congratulations to Mr. Andy Kricun, the winner of the 2017 Leadership in GSI award.