“New ideas must use old buildings.”

This quote from Jane Jacobs’ seminal work, The Death and Life of Great American Cities, responds to development in cities fraught with new construction projects. She writes, “If a city area has only new buildings, the enterprises that can exist there are automatically limited to those that can support the high costs of new construction.” For her, the ordinary enterprises that are “necessary to the safety and public life of streets and neighborhoods,” and that will most likely not be able to pay back the requisite high debts of a new construction project, will take up residence in old buildings.

These spaces require vision, but also, it is these spaces that support risk, vision, trial and error, and business decisions that take into account more than a conventional bottom line. In this way, the link between space and mission is undeniable.

Think about space — not asteroid belts or the many moons of Jupiter — but space: “the boundless three-dimension extent in which objects and events have relative position and direction.” Or actually, how about this: think about the room you are in. The physical spaces we indwell and the spatial relationships to which we adapt and modify to meet our basic needs of shelter and safety allow us to eventually graduate — think Maslow’s hierarchy of needs — to self-fulfillment or self-actualization. At the very least, space plays a critical role in this journey.

But whether we are conscious of the impact or not, the spaces we inhabit, create, or maintain have a tremendous psychological impact, not only on our interactions, but perhaps even on the possibilities of the work we commit our lives to.

Crossroads Women’s Center (CWC), a “grassroots, multi-racial, community-based meeting place where women come together for support, programs, services, information, classes, training, referrals, and action on issues of concern to women and our communities” will double, if not even triple their square footage with the completion of a newly purchased property on Wayne Ave. in Germantown. Sitting between a halal deli / health food store and a day-care, CWC’s forthcoming community space was a former hardware store until the owner retired, and for a little while longer, until the renovations are completed, the rusted True Value sign still remains affixed to the facade. (In fact, during my visit to the new space, a passerby peered through the glass of the front window, seemingly surprised that he could no longer purchase the home repair supplies he needed. This is a common occurrence, I am told, although most are excited about the much needed new community-centered space.)

“I feel like the small space we were in — while for eighteen years it served as a wonderful base we could call our own — constrained what we thought about our possibilities,” said Phoebe Jones of CWC. Phoebe spoke about movie nights or educational workshops where a group of five or six felt like a crowd in their row house, which continues to serve as their center until the new space is complete. Before that row house, volunteers worked out of people’s homes for twenty years.

For almost forty years, Phoebe and her colleague Pat Albright, who put college on hold to be part of the movement against poverty, discrimination, and war, have worked with and on behalf of women in the community. Phoebe calls their work a “cause not a career.”

“I think that our structure was, and still is, unique,” said Phoebe. “Any money we received was funneled back into the group. We chose to forego salaries instead of paying ourselves which meant that we had to find a way to survive.” To do so, most volunteers worked part-time and then used what time they had left to support CWC’s mission.

This is the moment in our conversation that I am stopped in my tracks, humbled. I can only speak for myself, but I know that when I graduated from college and entered the working world, I had spent many hours staring at job boards hoping that the right opportunity and the right circumstances would align so that I could go out into the community and serve. Yes, one must consider how to keep the lights on, but CWC’s volunteers responded to the while-we-are-talking-about-hunger, people-are-dying-of-hunger-dilemma by coming to terms with the risks and sacrifices required of them if they were to cross divides of sex, race, class, ethnicity, nationality, age, faith, and sexuality so women, as well as men, could come together in their community.

“Do it, and you’ll find a way to manage, but its important to know that we are not doing this as isolated individuals,” said Phoebe. “We count the innumerable benefits and satisfaction that come from making this decision about how we spend our lives — collective working means support and looking out for each other and our loved ones. This work is infinitely creative, energizing, exciting and varied; we learn skills, we see change, and meet a huge range of wonderful people. Few, even well paid, jobs can match that.”

I had the opportunity to speak with another woman, Carolyn Hill, a mother and grandmother, who is active at CWC. She shared a story with us about an experience where a pastor told her that she was going to be a missionary. She thought: “Where am I going to be a missionary, where am I going to serve?” While patiently waiting for that vision to actualize, Carolyn continued to cook for people, look after children in her neighborhood, and work as part of CWC to support other women like herself navigating the Department of Human Services’ labyrinthine system and working for change. She then realized that she was already engaged in the kind of helping work that was foretold. “Sometimes you don’t have to leave your neighborhood to serve a cause,” she said. Carolyn spoke about her experience with CWC as a way to give back and support other women and families in her neighborhood. Her work also helped her to see that she was not the only one dealing with all too-familiar challenges and struggles. Six years later, she said that she is still learning how to best support the community of women that she is a part of.

Another woman, Kai Akwei-Bey was in conversation with Pat about how so many of the tasks that women in the community do on a daily basis are undervalued and invisible to most people. Kai even proposed an event that she called the “Visibility Banquet” to help bring to light the issues central to women’s struggle for equity and justice, and against racism and discrimination, as well as, an opportunity to celebrate the inestimable and sometimes thankless work that women do on a daily basis in communities, specifically distressed and disadvantaged urban areas.

Groups that work out of CWC advocate for the invisible care-giving work that women do in the home and community to be counted and compensated, and they are fighting for wage equity solutions that will shrink, and hopefully eventually eliminate, disparities in pay for women and people of color. “Women’s work outside of the home is often low pay because so much of what we do in the home — care-giving work — is unpaid,” said Phoebe.

“If we, women, were not doing this work, everything would shut down,” added Pat. “It’s part of our history.”

Much of this work demands that there be a change in culture — one that values care-giving work, both in the home and in caring professions, like nursing, teaching, health care, childcare, and justice work.

CWC’s work is a large undertaking and the volunteers were honest in sharing about the overwhelming nature of their work. “We operate on a self-help basis, that is we fight with, not for, each other. We are not in a client/staff relationship but one of mutual accountability. It’s the only way we have found that works, that addresses power relations between people, that doesn’t totally overwhelm, and that allows us to grow individually and as a group. The new building will allow space for a larger group to strategize together, enlist community support, and celebrate victories.”

Much of their work is about committing to the process of creating a safe and welcoming space for a diverse community of women and their families to come together and support each other. They are making room for a wide array of voices, stories, and struggles to unite, including that of men who also volunteer at the CWC. They are making space for women to be empowered. They are making visible challenges to the issues of poverty, injustice, mass incarceration, and discrimination in communities. And just as they are increasing their physical capacity with their new space, perhaps they are also increasing their ability to imagine new possibilities for their mission.

CWC is prudent with their resources. To them, there are too many needs in the community to spend a lot of money on decor. (Everything at their row-home community center had been donated.) “We cannot afford to be some kind of trendy high end place or something that’s not who we are,” said Phoebe. “We continue to watch every penny and make sure that we have a warm, welcoming, comfortable, functional space, one where people feel good when they arrive.”

Now, with their larger space, CWC will be able to implement a new way to support their programming: retail spaces. There are plans to renovate the former hardware store into three spaces; two spaces will be rented to retail businesses and the rest of the building will become their new community space. Revenue from the commercial spaces, along with their ongoing fundraisers and grant funding, will support CWC’s mission and programming.

“After finding this place, we felt an urgency to purchase this building,” said Phoebe. “Because of where the world is now, there is a huge need for a space like this. People need a safe environment where they can come together across divisions to defend their rights. Many people are very worried about the future, about survival — they worry about rape and domestic violence, poverty, survival, discrimination, environmental devastation, and pollution…. There is much to do.”

In fact, actually being in this building and sensing its potential helped to clarify CWC’s decision to undertake the mixed-use concept. Phoebe said, “We wanted a place with meeting spaces, room to be able to serve an inexpensive but nutritious and delicious lunch for those volunteering, an area to do yoga or have children’s activities, and host cultural events. We wanted a big room — now we have five big rooms.”

With more space, comes more room — room to grow, room to dream, and room to take the risks that spaces like this allow. For Jacobs, this was the need for old buildings; for CWC, this is the possibility of old buildings.

To learn more about CWC and their variety of programming, as well as future fundraisers and volunteer opportunities like their recent Rummage Sale and Pop-up Salon, visit www.buildingcrossroads.center where you can also donate to their mission. To contact Carolyn, Kai, Pat, Phoebe, and all of the other volunteers about how to support the completion of their new space call 215–848–1120 or email philly@allwomencount.net. 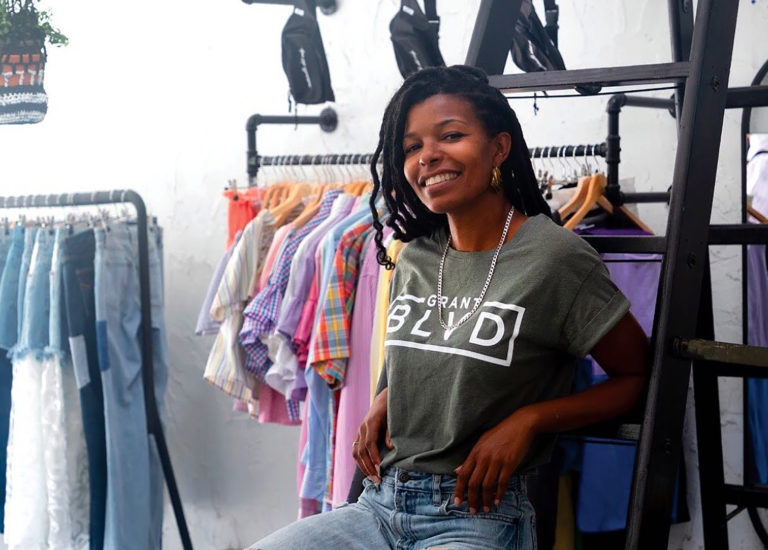 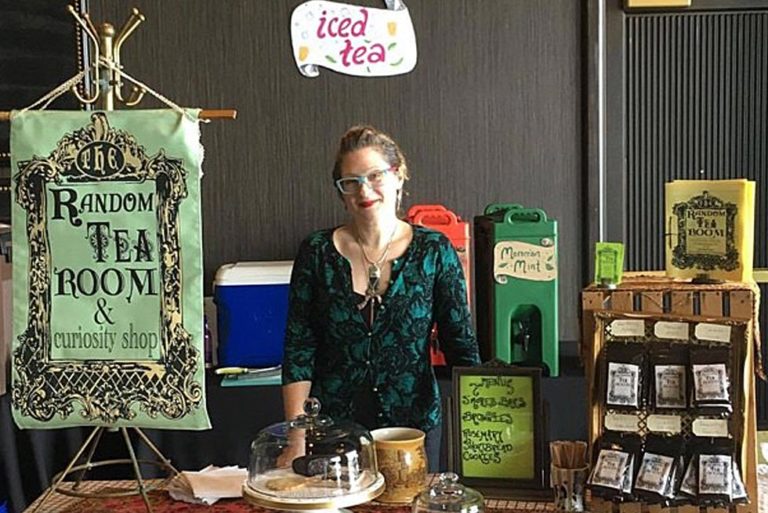 The smallest decisions create an energy for change