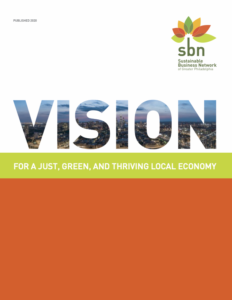 (PHILADELPHIA, PA February 20, 2020) — The Sustainable Business Network of Greater Philadelphia (SBN) is building a new economy built on equity and climate resilience.  Since its founding in 2001, SBN has been serving independent businesses based in Greater Philadelphia, helping them to improve their social and environmental practices, as well as their profitability.

SBN often gets asked, “What does a just, green, and thriving economy look like?” so they embarked on a year-long project to offer an answer.  Informed by SBN’s 20 years of leadership, as well as substantive research and input from their membership, SBN selected 25 issues that are core to any metropolitan area’s ability to achieve equitable, inclusive, and climate resilient economic growth.  SBN elaborated on these issues in their recently published paper, Vision for a Just, Green, and Thriving Local Economy, which covers everything from equitable transportation systems, renewable energy, nature-based stormwater management, resources for business owners from historically marginalized communities, and incentives for socially and environmentally responsible business practices.

“This paper is SBN’s stake in the ground. We wanted to be transparent with and accountable to our members and other stakeholders about what needs to change in order for our region to have a thriving local economy rooted in equity and climate resilience,” said SBN’s Executive Director, Anna Shipp. “SBN believes in the extraordinary power that businesses have to be a force for good, and we know they can’t move the needle alone. Government and our local business community must work together to innovate and advance policy solutions that drive real systemic change.”

“I’m proud to see SBN step into a new era of its advocacy,” said Heather Hanowitz, Chair of SBN’s Board of Directors. “This paper demonstrates the uniqueness of SBN and its membership, the commitment that these incredible businesses have to the region, and the necessity of partnership between the private sector, government, and communities in creating an economically vibrant, socially equitable, and climate resilient Philadelphia region.”

The Sustainable Business Network of Greater Philadelphia (SBN) is building a just, green, and thriving economy in the region.  We inspire, challenge, and support the local independent business community to be change agents in the movement towards social equity and climate resilience.  SBN members are independent businesses based in Greater Philadelphia that practice – and measure success by – the triple bottom line of people, planet, and profitability.  Since our founding in 2001, SBN has remained the region’s leading membership and advocacy organization serving the local triple bottom line business community.

Back To News & Press